Welcome to another Wildcard Wednesday! Saturday, January 17th, was Betty White’s 93rd birthday. After six years on TVLand’s first scripted sitcom, Hot In Cleveland (2010-2015), this golden girl will be looking for another series. In today’s post, I thought we’d take a look at a forgotten Betty White sitcom from the ’50s called, Date With The Angels (1957-1958, ABC).

This multi-camera sitcom aired for two half-seasons before turning into a short-lived 1958 variety show. Betty White and Bill Williams stared as newlyweds Vickie and Gus Angel. She was a homemaker and he sold insurance. The original concept, created by Don Fedderson, would have Vickie as a chronic daydreamer, imagining various scenarios unfolding for each episodic situation. Although this device was used in the pilot, only two other episodes explored this concept, and it was dropped in favor of more traditional sitcom plots. The show’s greatest strength was its excellent use of recurring character actors. Natalie Masters and Roy Engle played the couple’s best friends, Maudie Prickett and Richard Reeves played obnoxious neighbors, Gage Clark played an obstetrician while Lillian Bronson played his outspoken mother, Burt Mustin and Richard Deacon played eccentric neighbors (father and son), Jimmy Boyd played their nephew, and Nancy Kulp played Vickie’s friend who worked in a department store. These characters would pop in and out with regularity — usually to great effect. 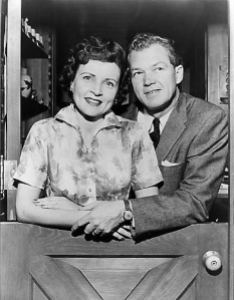 I’ve featured three episodes from this series on past Wildcard posts, but by and large, I’d always found the series to be exceedingly mediocre. Watching 30 of the 33 episodes (I’m missing “Night School,” “Nobody’s Father,” and “Cousin Herbie” — if anyone has them PLEASE let me know) chronologically, I was shocked at how fresh and amusing the first season of 12 episodes managed to be. After that, things quickly devolved into forgettable humdrum. However, in honor of Ms. White, I want to share my picks for the best episodes of this series — the first ever guide to the best of Date With The Angels. They are in airing order.

Vickie calls upon an obstetrician to check on Gus when he falls ill. 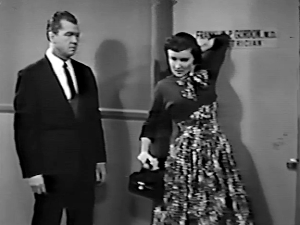 Gus gets sick on the day that Vickie is throwing a baby shower for her friend Wilma. The only doctor she reaches is Wilma’s obstetrician, who comes by to look at Gus. But Vickie doesn’t want her husband to know that he’s a “baby doctor.” It’s all rather juvenile, but there are some big laughs, especially with Wilma’s blabbermouth husband. Nancy Kulp makes her debut on the series as a guest at the shower.

Vickie and Gus are driven crazy when her goofy nephew, Wheeler, comes to visit.

This episode introduces Vickie’s nephew Wheeler, who proved so successful that he would return twice before the series ended. Although I usually don’t enjoy shows that revolve heavily around kids, the writers make Wheeler more than just traditionally obnoxious. Instead, he’s well meaning but… well, goofy. And much of the comedy comes from Gus and Vickie’s reactions to him. It’s actually very funny.

The Angels get caught up in a web of deceit while trying to avoid an annoying couple. 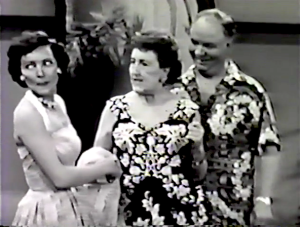 Sitcoms have regularly done episodes upon this variation: one character lies to another and then the lie keeps growing and growing. (Everybody Loves Raymond did this well.) The premise is incredibly well handled here, presenting Vickie and Gus as flawed multi-dimensional people — as opposed to the cutesy newlyweds that most later scripts would force them to play. Additionally, the script is littered with great jokes. My favorite.

Vickie accidentally takes a job at a department store when she goes to buy Gus a tie.

Although the fact that Gus refuses to allow Vickie to work (something that she doesn’t seem to mind) comes across as incredibly dated — even for 1957 — this installment makes time for some great comedy as Vickie wreaks havoc in a department store to the chagrin of her new boss. Nancy Kulp is along for the ride, and again, the episode works because Vickie is portrayed as being fallible.

Vickie and Wilma try to matchmake between Dr. Gordon and Gus’ secretary. 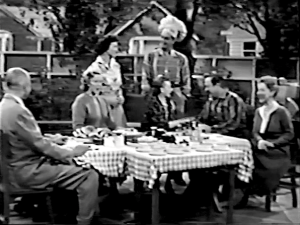 Another common sitcom story, this installment has the wives trying to make a match between the obstetrician from “High Fever” and Gus’ unmarried secretary. The husbands catch wind of their wives’ plan and scheme to keep it from coming to fruition. Complicating matters, and adding some delicious comedy, is Loie Bridge as the doctor’s talkative mother. Fun installment.

Gus’ elaborate plot to surprise Vickie on her birthday does not go as planned. 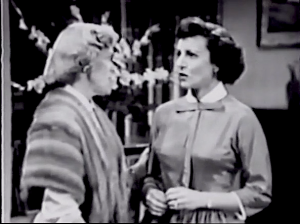 This is a shockingly well written episode that, although motivated more by the story than the characters, manages to be both funny and unpredictable. Everything that could possibly keep Gus from surprising Vickie as he planned happens; and it’s to great comedic effect. Meanwhile, the episode makes natural use of Betty White’s real life love of animals, and allows many moments for the ensemble members to shine. Great episode. MVE runner up.

Wheeler comes back to visit and gets caught in a love triangle.

Wheeler’s second of three appearances is just as good as his first (if not better). His parents send him to Gus and Vickie to keep him away from an obnoxious girl named Laurie, who’s just as unsophisticatedly amusing as you’d expect. A triangle is developed when Wilma introduces Wheeler to the exact opposite — a snobby teenage actress who revels in name dropping. Vickie’s reaction to the girl is priceless. 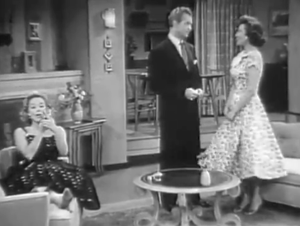 I featured a link to this episode in last year’s birthday tribute to Betty White, and it remains one of the series’ absolute best. In addition to a wonderful guest appearance by Cara Williams as Gus’ old girlfriend, the episode uses the “daydream” scenario that it had abandoned after the pilot. The script is laugh-out-loud funny and the performances are loaded with truth — especially when Williams’ husband shows up and knocks her down a peg.

Other notable episodes include “Pike’s Pique,” which is set entirely on a boardwalk carnival, “Christmas Show” [a.k.a. “Santa’s Helper”], in which Vickie gets Burt Mustin’s character a job as a department store Santa, and “A Day At The Track,” in which Vickie plays the horses.

*** The MVE Award for the Best Episode of Date With The Angels goes to…..

6 thoughts on “Celebrating Betty White’s 93rd: A Look at DATE WITH THE ANGELS”